How to sound activate land

The above short video using tuning forks to “sound activate” a castle was one of a series of four taken in January with artist Whit Forester of the USA. As Whit puts it;

By placing the tuning forks on the floor we turn each floor of the Castle in Ireland where this takes place into a resonant chamber that vibrates at the frequencies of the forks. In small ways, this also turns the entire castle into a body which thus vibrates at the same frequency into the land.

In 1997 Whit attended Oberlin College in Ohio, a private liberal college renowned for its environmental awareness. He graduated in environmental studies and since then has taken an artistic approach to environmental problems. In the intervening period this rightly ambitious artist has become involved in many community and creative projects. Whit perceives the early Irish monks as having cultivated (excuse the pun!) an attitude towards the plant world that was in harmony with nature and the human spirit. We now are having to return to this earth wisdom in order to survive, but the silent struggle with multinationals who poison Ireland with their Round Up and other chemical applications is still ongoing. 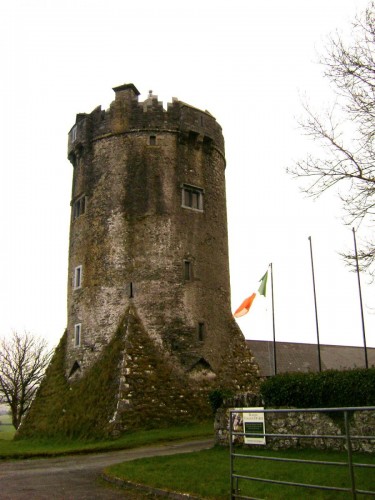 Whit aims to awaken people’s awareness of their connection with the plant kingdom through his interesting art. He is using the beauty of naturalised plants to show a deeper malaise in our world that he seeks to address through art, rather than cold scientific fact. While I was taking him around the ancient and nature sites he wished to see (holy wells, natural water etc) we talked about my interest in using the uniquely and exquisitely sounding Solfeggio range of tuning forks, since they are linked to various states of being in the process of raising consciousness. Whit immediately invited me to join him at the College of Art where he is based for a session of using these forks on the various floors of Newtown Castle. There we “tuned in” (another pun!) and created a simple ritual using the forks to “activate” the castle and thereby the surrounding land that this castle site links with. Since Newtown is on a ley line in the central area of an earth grid devised by Templar Mechanics, this was a poignant exercise for me to partake in.

Now he has been asked to return to the Burren College of Art as an artist in residence this summer, I look forward to collaborating further with him on his artistry that is highlighting the beauty of the natural plant kingdom in relation to the legacy of colonisation.