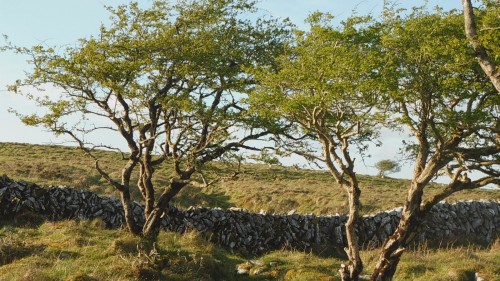 These gnarled hawthorns creating a small grove of shelter on the limestone desert in the Burren are about to burst into blossom. Trees that grow in threes remind me of the triple goddess aspect in the cycle of life and nature.

The hawthorn month is a time when nature is showing us her pulse loud and clear, and it is a racey one, with the courting of the king and queen at Beltaine, and the strong heart that the hawthorn affords. She transforms the smouldering fire of the blackthorn into a raging fire that burns fiercer than any other tree. The fecundity of the blackthorn had lived in the depths of our imagination. Now it moves into the realm of the physical and becomes raw sexual power, coupled with the complex power of female intuition.

The hawthorn has insights into a rare and privileged overview of the natural world.  She organises order from the naturally chaotic world of nature, but she does not do it though logic or direct intent. Her inspiration comes from a love spun on Spring breezes of hope and potential.

My poem from my book Tree Murmurs only touches on the complexity of this month. It is but one aspect of a huge cauldron of intuitive faculties nurtured by the hawthorn:

I am the feminine

With fire so strong

At one with the Divas –

But not with men

Who long for me

My celibacy celebrated in sun-kissed berries later in the season

Honour me, and I will protect you.

My affinities are almost boundless,

I am of the alluring wild –

Returning to the hawthorn this year with great anticipation, I realise I had overlooked how wildly intuitive her energies are. In the past I had focussed on her sweet aroma, her white mantle of star-clustered flowers, without realising how she conducts a great love affair with utter discretion. She courts the world of nature and reigns supreme. Fertility is in her veins, and she carries a thin veil between the worlds of nature and  our own. This is quite potent and one can almost feel drunk when you think of her essential qualities. She appears to be light and gay, but underneath she is a ruler of destiny that knows her own mind more than most. She is hard to define, and that may be because I have only now woken up to her ruling planet: Mars!

Once known as the cuckoo tree, small wonder my meditation includes:

Your cloak of blossoms whisper of the thin veil that exists between the words you inhabit simultaneously. The fairy love and the human world intertwine here. While you stand guard in the field, you bring a fierce sense of fiery presence. Such is the complexity of your sweet apparel, that cloaks a female warrior.

In my Celtic Tree essences, the Hawthorn is the one who epitomises the saying “Never judge a book by its cover”. Having contemplated this tree, I would agree whole-heartedly. You may buy your bírthday essence or the essence of the month we are ín, so currently we are enteríng the Hawthorn month for everyone.