The Rowan Month is upon us

During these literally dark times we are experiencing on the Irish western seaboard along the much-marketed Atlantic Way, the full moons seem more powerful. The full moon last Christmas reawakened a deep appreciation for the moon in me. The moon influence is important. According to my mystic friend William Buehler, there used to be two moons attached to the Earth, and since one fell there has been an extra burden placed on the remaining one. In these times of relentless changes, the waters, that are to a large extent controlled by the moon, have undergone turbulent motions.

Simultaneously this turbulence is echoed in the human arena, where many humans (including myself) are experiencing a strange cough that awakens them in the middle of the night. From a TCM point of view, between 1 and 3 a.m is the time when the Liver is dominant. This is when the cough invariably erupts. I feel a sense of urgency when I consider how this universal cough is accompanied by elementals. They are making themselves known to us at a very physical level, perhaps with a subtle message our souls may grasp. Liver is associated with anger and frustration – could it be that the elementals are expressing their frustration through us? We are all connected in reality.

It is as if the earth is prompted by the Moon to make its presence known, and the accompanying elementals are shaking us up to our responsibilities. For some weeks leading up to this season’s mammoth flooding, I have been investigating the best methods to purify and enliven our drinking water, for I felt very drawn to honouring the Water element. (This is an exciting subject for another blog!).

Amidst this musing I was somewhat significantly invited to attend a local training in the ancient Ogham tree essences. The creator says the training was partly inspired by my book on the Ogham trees Tree Murmurs. 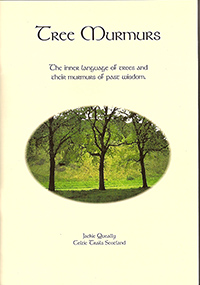 Many communications that arrive in my inbox are connected at a far deeper level with each other. A biodynamic journalist and beekeeper in Nova Scotia (where I will be going to talk and give workshops in September) wrote along the lines:

“because the Christ Etheric Grid is so established it makes sense to us that the essential oils from plants and trees are a healing bridge at this time. They can act very quickly and in sympathetic vibration with the human being.  They will be the “helpers” to bring us all along without too much discomfort and upheaval in our collective consciousness.  The trees help us adjust to the changes in the cosmos and here.”

In my view the Celtic Tree Calendar is devised out of knowledge beyond time and space. Its truth is timeless and universal, much in the same way that the Reshel (fully Christic) earth grids are. There are thirteen tree months that make up the backbone of the ancient Celtic Tree calendar. They form the basic consonants of an earlier alphabet, called the Ogham. Each initial sound for the tree was chosen as the main consonant, and the whole sound was graphically expressed as a rune.

I now will share the cosmology of the Rowan Tree with you, for this is the dominant personality or flavour of the month. Its inner sun, that vibrant sun that also resides in the centre of the earth, is shining. See how my poem resonates with your own inner experience:

I am the fire of effervescence.

in a fountain of release

loss of wholeness.
Protected, I lead you

to your world of higher senses,

Within, without, you turn

You mirror  me, and grow.

The rowan calls for discipline and self-control. It is the tree of highest (purest) magic, and builds psychic powers. It naturally protects ley lines and stone circles. Success is guaranteed when you work appropriately with the essence of this tree. The rowan is benignly positioned at the start of our year. In 2016, we are called to exercise discipline and build on our inner strengths. Then we can reach new levels of ecstasy in this dance of life. The rowan will bless us on our way.

The inward strength of the rowan then turns to another solar sign, the Ash, as we enter the month of February, which augments the success we are invited to achieve.

Over the whole season the dominant element is water. This is represented by the Elm, and the workshop on the tree essences is initiated by the owner of the Elm Tree Clinic in Galway!