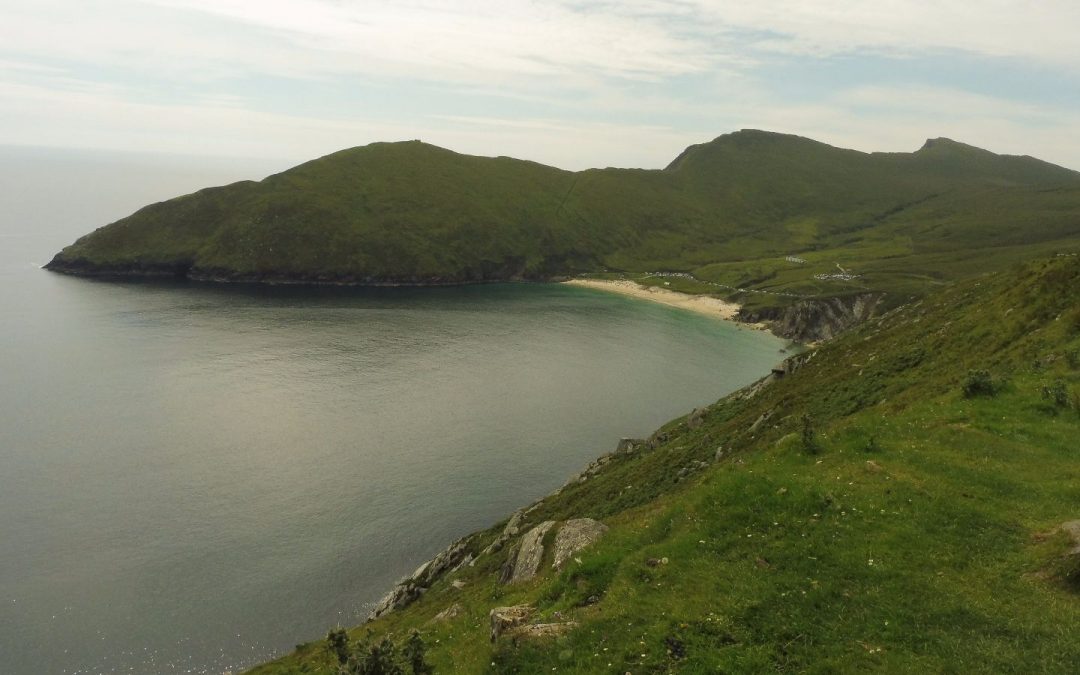 Seeing a window in the Irish wet summer I set off for Co County Mayo on a solo Achill Island journey. I was hoping to find a specific area that a friend had told me held high earth energies, albeit on hearsay. My friend’s grandmother came from the westerly Achill Island. I had met other islanders in the recent past who lived on the island and who had told me about the high cliffs beyond Keem Bay, named Croaghaun Cliffs. They are the highest cliffs in Ireland, and having seen the Cliffs of Moher many times and the lovely cliffs of Slieve League in Donegal, I wanted to see these Atlantic cliffs at close hand. Meanwhile the specific area with high energies lies a little to the north and contains the lowest corrie lake in Ireland Lough Nakeeroge. 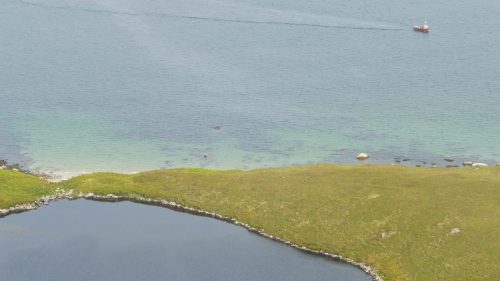 From time to time my soul needs solitude in nature. I am sure I am not alone in finding a host of signs that speak to my heart when I set off on a mission to go somewhere. These signs remind me of the early Christians who set off to create hermitages in the west. Birds, trees and the elements all spoke to them as they walked the long miles across open high ground. Later remnants of poetry speak of their intense love for nature, often zoning in on her finest details. Japanese Zen poetry too speaks of these little moments encountered in nature. For me, they bring me into a wider more open internal space where anything is possible and dreams can fly. This is the essence of a Celtic journey.

The first sign on my Achill Island journey I received came from the matron of Pure Magic where I stayed. She told me that I could walk past the deserted village to Annagh my destination. It fringes Slieve Mor and the Atlantic. On the way I walked up to a court chamber that I dowsed  there was a cross ley on the large stone and the main axis headed toward the cemetery. 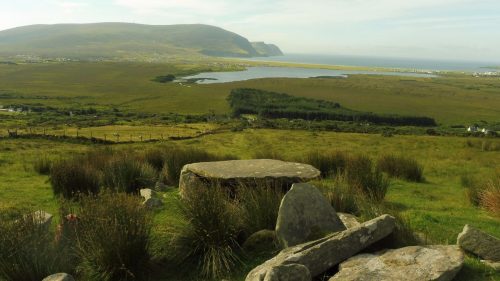 Across the hillside a group of archaeologists were discovering a cromlech that was older still, perhaps Neolithic.

When I got to the cemetery at the start of the path to Annagh, I met a local man driving out of his driveway. I remarked how the tourist map was wrong for it indicated early Celtic crosses close to his home, when indeed they were in the old section of the cemetery itself. We fell into an easy chat and he kindly advised me to approach the corrie lake from a dam outside of Keem Bay. So I drove on to the coast and back inland to park.

As I set off across the heather moors, many wheatears sprung from among the grasses. Their name comes from the Gaelic meaning “white ass” and the locals used to call them “white bums” in English still. They are delightful creatures who make their nests in open grasses. They literally flit a short distance and land again.  I looked out for the lowest part of the horizon seaward and headed for there along the sheep tracks. About half way there I met a stream that provided much needed water. The day was hot and breezy. A butterfly flew by. 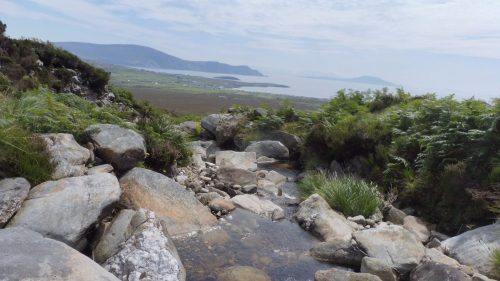 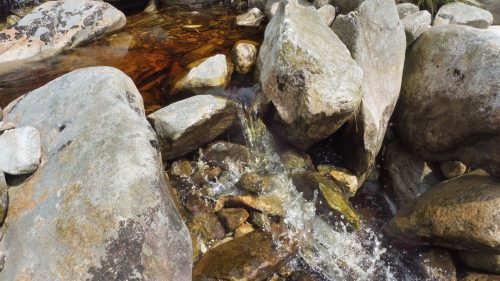 The vortex of Achill

Once I neared the sea at the back of the island I wondered if I had indeed walked in the right direction. There were no signs or paths. I had walked solidly for about an hour with no human in sight. I reached the crest of an incline and there the vista opened up to this amazing view. What struck me was how the water was shaped like butterfly wings from my perspective. As I gazed down, two eagle-like birds soared in the sky above. 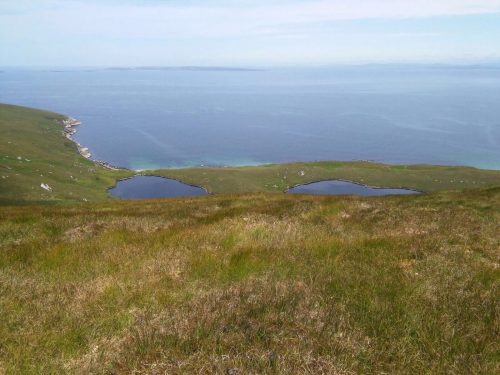 I felt like lying down to soak up the energies. When I did so, I felt distinctly dizzy, as if I were on top of a vortex. The phone silent for so long rang. It was a man telling me about women who wished to create a fire poi ceremony on his land the day of my August workshop! We are now in the season of the Heather, and the Element of Fire in the Celtic Year calendar. (Come and enjoy the combination of the gong and the fire poi after the workshop!) 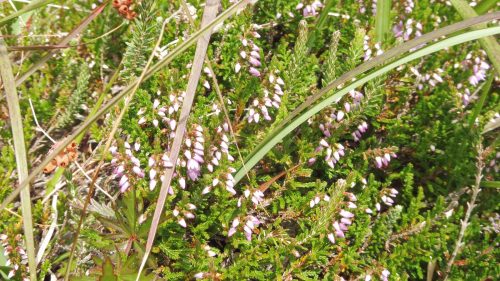 I was tempted to walk down to the remote beach at the back of the island I now could see. 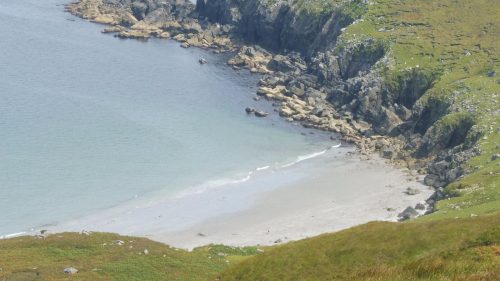 However knowing if I went swimming after a strenuous walk and developed cramp, I was isolated. I decided against the notion. So I walked back and ended my Achill Island journey in nearby Keem Bay, where I dipped in the waters. It was a mere 16 degrees, rather like taking a sauna plunge. Soon I was out and on my way for a delicious seafood platter in a local village.

As I drove over the bridge to return to the mainland, I felt a tug from my feet. Looking down I noticed my trainer lace was caught in the door. The words came

where the smell of pure air and the gentle folk

still chime to a timeless space. 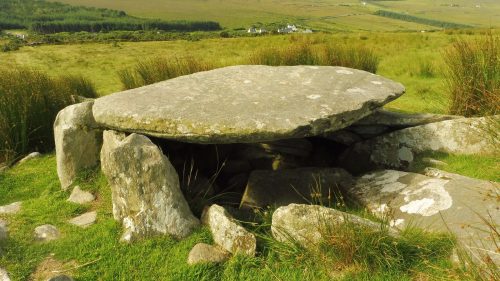