Gaia Touch and its applications

Marko Pogacnik has set the ball in motion to come to the Burren in May 2016. The Burren in the west of Ireland has international status as a geopark, and the UN have expressed a wish for him to do workshops in the geoparks. Due to him knowing me he has requested that he starts his workshop tour in the Burren in Ireland, so I shall be organising his visit.  I have been sharing his work among local communities by presenting half-day workshops and evening talks on his Gaia Touch exercises. These are special exercises often described and illustrated in his many books.

The exercises function as a means for world peace, for earth healing and for even new economics when used in conjunction with meaningful dialogue. In other words, there are various applications in which you can use Gaia Touch exercises.

I attended a recent workshop at Rudolf Steiner House where Marko was looking at the Templar mission, and transforming their previous history as bearers of swords into bearers of flowers. This is what I term the shift from the Red Path of the priest-warrior to the White Path of the peace warrior. From my studies of the Reshel with the highly respected William Buehler 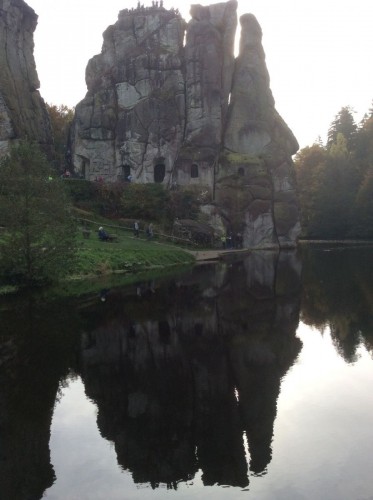 I know that we straddle two paradigms as the world shifts from one perspective to another. It has been interesting to meet Marko 15 years on from when I first encountered William’s work, because Marko is working at the denser physical level as well as at the Metatronic or Christic level that William focuses on. Marko is attempting to work with where we are now in order to create a slow but permanent shift in world perspective, using dialogue and subtle movements coupled with imagination. I see both approaches as valid as I often see that Marko’s visions and dreams are influenced by the Metatronic beings of light that are always apparent in the synergy light work that William conducts on a regular basis. (since 1975!)