I know how you love to write books on the subject of earth healing, and I personally find them very deep and authentic. I also notice that you always evolve in your thinking over the many years you have been writing. What would you describe as the most pressing themes to address currently?

There are few such themes, first of all which are the so-called Earth Changes. Without being noticed at large, the very foundations of the currently space-and-time horizon we are living in are changing. I try to make people aware of this fundamental change because then there is the hope for future. Secondly there is the urgent need to renew the peace matrix – the wars around us are a harsh reminder about what needs to be done. Then there are the currently invisible realms and their beings that wish to offer help but they are scarcely recognized as partners. 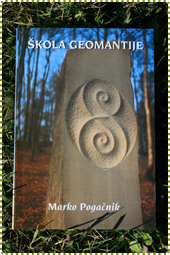 one of Marko’s stimulating books

Your latest book is currently only available to German readers-do you envisage it being translated into English? What are its main themes?

Three of my last books exist only in German:

With any knowledge I gained of the Reshel system it was engaged at the levels of co-creation and eternity. In view of the rapidly changing times we live in, what levels of nature beings are you most involved with in your work? If this question is irrelevant please say so and indicate where you are focusing now?

I am mostly interested in the primeval civilization of the Earth. It is a civilization of the elemental beings represented by the Sidhe in the Irish/Celtic tradition. I find their monuments in different parts of the world are not recognized as creation of a culture because they appear to “created by nature”. I believe that they could be our partners in finding the way out of the current ecological break-down.

What are your hopes for when you come to work on the borderlands between north and south Ireland?

I will be returning after more then 20 years to the Derry-Donegal landscape where I created, together with my wife Marika and our daughters, a lithopuncture (acupuncture of the Earth) project with 17 standing stones on both sides of the border between North Ireland and Republics of Ireland – this was a peace project initiated by the Derry’s Orchard Gallery. Since that time the peace process started up and also other circumstances may have changed. I am interested if the peace work started at that difficult time can be now intensified for the benefit of the Earth. 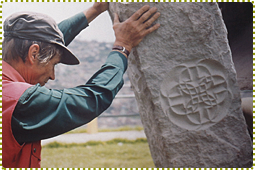 Marko erecting one of his lithopuncture stones

I know you were in the Dead Sea area recently, an area that I believe holds strong energetic connections with Ireland. Both countries are accustomed to creating man-made divisions, and yet I sense the potential for change is nearer the surface nowadays. Do you ever sense that the actual sequence of journeys you undertake to various countries reflect a deeper pattern that offers a schematic for peace?

I started last year in Munich with a Peace Workshop aiming at renewing the global peace matrix. This year the workshop continues in Berlin, Zuerich, London etc. The Dead Sea workshop in connection with my previous work in Jerusalem offers a new impulse for continuing this kind of work which is very much dedicated to the peace within the human being and between humanity and the beings of nature. I hope that the situation in Ireland will help me to develop its concept.

I am keen to share the Gaia Touch yoga exercises you taught us in Germany. Have the nature spirits indicated to you the relevance of practicing these for our times? Would holding a strong intent to work with the elemental world while making these gestures be key to their effectiveness? Is the benefit of doing the exercises more for the Earth than our individual lives?

The connection to the elemental world comes through the resonance with the place and its beings that taught me the given exercise. It does not need to be held in mind. The effectiveness depends from how present you are while doing Gaia Touch exercises. It is also important the clarity of the movements because movements in this case are a form of language. The exercises address the human being as a being of what I call “the Earthly Cosmos”, so they are of benefit for both individual and the Earth.

I do believe that the Earth is evolving always. As humanity has largely forgotten the deep connections they have with the Earth, I am guessing we need to make renewed efforts, which these exercises support. In order for humans to understand the Earth in its evolution, do they need to tap into pulse of the inner Earth more than the outward phenomena?

Unfortunately our culture is totally attached to the phenomena of the manifested world, ignoring the more subtle consciousness levels of the Earth, nature and its beings. Since we are not aware that we are ignoring the sources of life, we run into the danger of losing our life force. A tree without roots can not stand upright. Also the sacred dimensions of landscape and its beings are being ignored. They may serve only as tourist attractions which is equal to slavery. 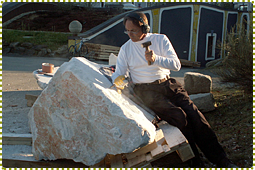 Marko working on one of his lithopuncture stones

Finally, do you consider we are in danger of losing our connection with earth’s evolution? To whose detriment will this be?

The danger you address is a real danger. Losing the possibility for further development in the embodied world would be a great loss because there may not exist in our vicinity such a paradise as the Earth has created. The situation is tragic because the Earth and her elemental helpers have started at least 18 years ago to construct a new space and time horizon that can safely lead the Earth evolutions into a new phase of development, but in general the human race does not realize it.

Thank you very much Marko for answering my questions. If any readers wish to attend one of his many workshops Click Here

For those of you living in Ireland I will be giving some Gaia Touch classes with discussions in County Clare and Galway in the coming month so please get in touch if you are called to participate in this very important work:

I started to perceive and formulate the Gaia Touch exercises one by one after the year 1998 when the Earth transformation process started to reveal itself. By Earth transformation I do not mean the shadow side only identified as climate changes. According to my perception it is a process through which new conditions of life are emerging upon the planet and a new more subtle space and time structure. I believe that the Mother of Life decided to set these changes into motion to prevent the vital capacities of the Earth to be destroyed. To be able to continue enjoying the beauty and creative challenges of this planet we have to adapt to changes – not just spiritually but also bodily.

The purpose of the Gaia Touch exercises is to stimulate personal development in order to be able to attune to the new emerging reality individually as well as collectively.