Where have all the fairies gone?

Having read a number of books on the fairies, or elementals of late – I feel in the mood, rather than overtly qualified, to write something on the, and indeed for the, fairies. There have been many incidents when I believe I have encountered fairies. As a very young child two wisened old fairies visited me one night, and I will never forget their loving presences. Much happened that night. It reminds me of the spiritual fact that many levels of being are integrated in these creatures from another dimension than ours. Fairies understand that they are an integral part of creation and life. Spirit pervades all life. The fairies hold one of the keys to understanding a spirit-filled creation matrix called Life.

In order to regain a connection with the greater stream of life, one has to learn to daydream. That is why so many fairy tales begin with the main character dreaming whilst resting during the daytime. They place themselves in a state of expanded consciousness by letting go of the normal day to day thoughts and hovering in between worlds. When the characters come back, they describe the fairy realm as the otherworld, but in reality this is where humans and fairies meet. The fairy realm is different. It is not one we can enter – but we can enter a shared kingdom, or state of being, called the Otherworld; one full of imagination and great beauty. We don’t tend to see fairies much these days- not because they are not around, but rather because the mass culture ignores them so we don’t expect to see them anymore. 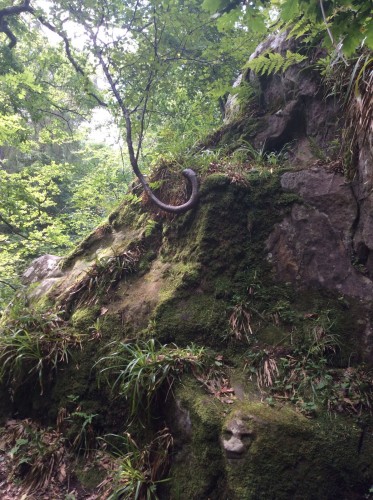 Certainly while walking in Roslin Glen I have often seen bright lights moving around-and when I bear my normal focus of attention upon them they invariably disappear. You see such phenomena out of the corner of your eye. Our consciousness is too awake to penetrate their vibration, and so we only catch these beings when we are focussing on nothing in particular. It is rather like when you attempt to see auras- you have to lose your focus and take in the whole surrounds as well as a focal point. This ability to see in more than one way at once is a clue to the consciousness emanating from the fairy kingdom. 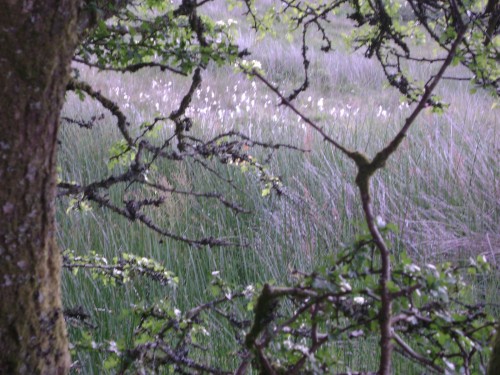 View from fairy portal on Slieve Elva in the Burren

Sometimes it is not a matter of seeing anything: it is more a matter of sensing a different dimension has entered the scene you are walking through. It is hard to put into words the feeling or sensation as it is a quality that is non-human that pervades the atmosphere.  I think it is similar to how you feel entering a sacred space that is not wholly a religious one- it is something from the distant past when humanity knew that all was connected in spirit. I get this feeling at St Brigid’s Well on the edge of the Burren,

Marko Pogacnik has written several books on the fairies, each book embracing them within a different concept. I think one of his most important messages is that the elemental beings, who are hierarchal in order, have learnt to adjust to the earth changes we are undertaking. However, humans are often ignoring the changes, not only the outward ones but those taking place on the inner planes too. If one can strive to sense more, if you like become a little like a fairy, one could do enormous good, for we all are connected to each other and the Earth needs us to help co-create a new emerging reality.  Read my latest interview which features Marko’s work here.

I do know that when I begin a tour by setting the intent to work with the nature beings and the inner earth, then small miracles start to occur with no effort on our behalf. We start to see things move where there is no physical wind, to smell sweetness and other aromas where nothing grows – but the dowsing pendulum swings madly over the bare ground, and to observe birds and animals do things as if we were not there.

Once in Roslin Glen I was being filmed discussing the intensely devic energies of the glen, when three blue tits flew between the cameraman and I, and started to repeatedly fly in an upward spiral between us. Eventually the camera man gave up, saying he felt the birds were giving us a message just to appreciate the abundance of nature, and not to film it that day. Over the coming days more and more miraculous events occurred, and he grew to understand that the glen held energies that were rare and very powerful. It is the high Sidhe (pronounced Shee) that work co-operatively to sustain, create and hold the space for these energies.

It is not just special places like Roslin Glen (we go there on my Scottish tours) that rely on the Sidhe. Every part of the earth is blessed with their presence. Soon, it is said we will have eyes to see them again.. that is a Heaven on Earth when it occurs.