After Marko Pogacnik’s visit to the Burren I invited local participants from his workshop to return for a follow-up workshop tour in South Galway, tuning into the earth energies and practising Gaia Touch exercises in nature. Throughout this post I will include my own sensations from time to time to give you an idea of some possibilities of working with the exercises. As the day progressed it felt as though we were following the Following Gaia Trail!

We did not venture far by vehicle so as to optimize our time spent on the land, in contact with nature.
First we went to where I often take my clients on a full day trail- an area of woodland through which the local river rises and disappears often, creating unusual topographical features. Our first place to visit was the Ladle. We walked anti-clockwise round this deep pool. There is a healthy oak standing tall and wide in the circular path halfway round. We connected with the tree with intent, and shared what we found. Many sensed strength – it is interesting what we perceive in this simple exercise as it invariably echoes elements we contain within ourselves. I placed my hands on my sacrum during the exercise, sensing that the tree was a guardian of this mysterious landscape. 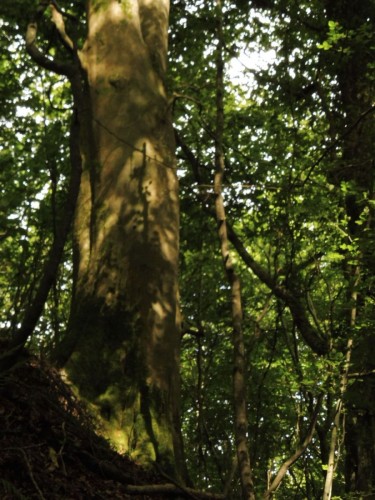 Moving off towards some large beech trees, we did one of Marko’s tree exercises where we visualise our bodies as trees and we breath in a specific pattern. I sensed a tingling on my brow. As we moved away I, along with the other woman, heard a noise that sounded like something large flapping. It did not sound like a bird though – and both of us concurred it sounded other-worldly. It occurred in almost the same spot to where previous paranormal activity has taken place with on other visits. My guest was unaware of this fact. The unusual flapping noise was akin to a large plastic sheet being played rhythmically (there is a kind of percussion instrument that looks like this.) 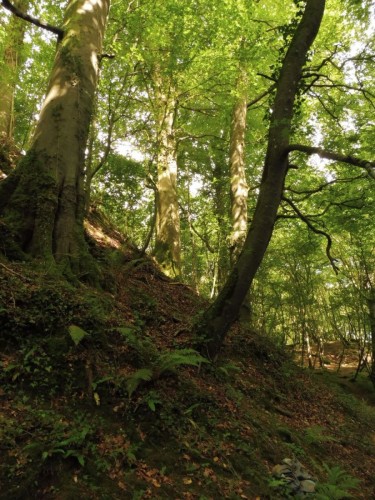 After hearing this sound, I felt it was a confirmation that we had set our intent well for the day. We were wishing to connect with and acknowledge the presence of the nature beings in order to help raise the vibration and encourage them to clear any blockages to the flow of energy at the sites.

In all, we did three exercises that I would call tree exercises, and after that we shared how we found it. In the final exercise we tuned into a beautiful beech tree that clings tenaciously to a steep river bank. I believe we all felt deep awe and love for it. The trunk in this tree separates and then rejoins to form one single trunk, not just once, but twice, in its long reach. When we open our eyes after doing the exercises, we all could hear far more acutely.A heightening of the senses often follows the correct practice of these exercises. The last exercise involved bouncing a ball of light up and down through our main trunks (bodies) and it seemed to build up an internal vibration that matched that of the river coursing below us.

One of the participants remarked on how strange the earth energies felt in the Devil’s Punchbowl – like I remark in my book Spirit of the Burren, the river here creates a trickster energy in the land, and when the same participant dowsed the general energy of the site he found it carried no anchoring definitions, and it felt as though it was neither here nor there! In other words, there was no negative or positive poles that create a definite energy line anywhere. This quality reminded me of the sea, for the sea is in essence “monopolar” in its energies, being a mass of potentiality. I suddenly received an insight that the land was somehow representative of the sea here, and that this land we were standing on mirrored the frequency of the sea. I thought too of how the many rivers in the region loop into underground caves only to emerge at the sea near Kinvara.
In some ways, it felt like we were standing in a swaying boat, and not on terra firma. One of the group was a fisherman and agreed. Emotionally it has the effect when tuning in of making you feel uneasy or dream-like, perhaps a bit uncomfortable. Maybe that is why the area is known as the Devil’s Punchbowl! 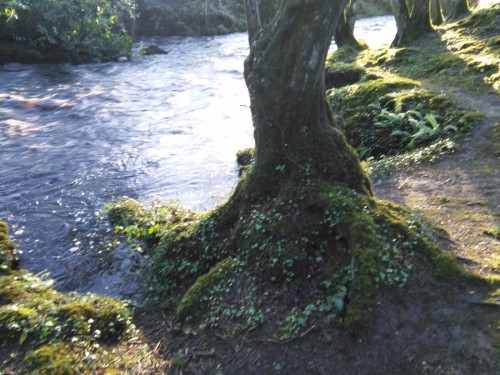 In a deserted eighth century church up the boreen (small road), we practised more exercises to help us connect with the causal/nature dimensions and the archetype of the true self preserved in the memory of the Earth, deep in the Earth. This was a very powerful experience at the church.

Some of the retaining walls were lain in very strange shapes in the graveyard, and dowsing shows the internal corners to be very strong in telluric forces. Practising the exercises on those spots lent to a very potent experience. In fact, a triangulation of spots was detected, one of them touching what appears to have been an older building now long gone. Often we only see one triangle but can assume there is another triangle pointing the other way, thus forming a Star of David. The cosmic and the nature realms represented by these two triangles are in balance here, and the six-pointed star of ley lines in the land also facilitates ease of contemplation, as this geometric symbol was revered in the past for its efficiency in forming deep connectivity. It is part of a metascience of sacred geometry known to initiates that existed in all religions in the past.

Moving on to another spot where a bullaun had recently been discovered (a bullaun is like a crudely hewn stone font probably used for baptisms and blessings), we felt a need to concentrate on the release of fear here. There was a mass altar in the centre whose age we tried estimating by dowsing. I myself tried it and got the date 1696 as the last date in use, but who knows? The date fitted the historical model I later discovered.

We finally entered a deep cave where the river we had been tracing emerges from an underground section. Here we toned different vowel sounds to specific chakras. I suggested adding gestures while we toned, to connect the fairy realms to our human heart. This left us with our own aftermaths – for myself, I had a ringing in my ears and I felt energised. I also was more aware for the next night and day of angels and cross patterns in the ether. I felt this was precipitated by using a combination of sound healing with Gaia Touch exercises. 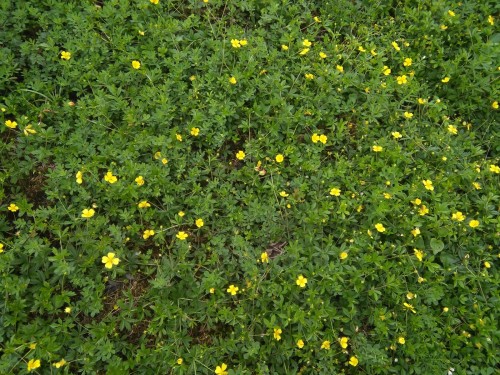 After our outside picnic, we walked to the dolmen behind Garrylands Nature Reserve – not too far from the fairy fort we had visited with Marko at Ballinastaig. The whole bottom of the dry turlough was covered with a bed of tormentil flowers. I was delighted at how easily everyone found the most direct route across the limestone to the hidden dolmen. First I took them behind the dolmen to the edge of the escarpment where we directed love from the inner core of the earth in all directions, for this dolmen had once been atop a local mountain before there were great earth movements that changed it all. Through yet more exercises we were increasing a sense of the divine presence of the earth goddess in our hearts. Working with our own hearts, and taking care that the manifest and un-manifest were working in unison, we finally sent a tear of grace to the ancestors. We all worked intuitively within the structure of the exercises. For instance, I found myself sending love to the ancestors from where I stood by a small boulder on the extreme edge of the collapsed stones, which I sensed connected to the tip of the capstone on the dolmen. 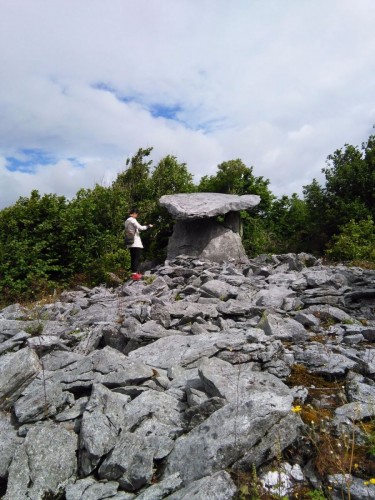 Things became quite interesting when we gathered together for sharing at the end. Descriptions of the energies inside the dolmen varied. Some sensed it was very still inside the dolmen compared to outside the dolmen, and others found it more spiritually alive inside. I sensed that words can get in the way at times- for instance when someone describes feeling “not in control” but connected to the wider whole, this to me is a response to sensing a divine energy inside the dolmen. Some go inward with this divine presence, whilst others feel “more real” as they open to the presence, and hence would probably not describe it as a still place. Divine energies are subtle and indeed hard to describe from our human perspective. We all express our perception of the divine differently, and yet as in many of these Neolithic sites, there is a key underlying pattern to each site that touches us, and links us with the divine.

When breathing during the Gaia Touch exercises, it is wise to pay attention to the gap between our breaths, for it is here that those divine energies, particularly those renewed energies, can enter our own energy field. Everyone’s experience is valid and we encourage each other to delve deeper than surface emotions. If we can visit a site with a still centre then we can inevitably go deeper with the experience, meeting the energies present in our heart.

In these ramblings, we are looking to discover the divine consciousness within nature that resurrects itself when we attempt to ally ourselves with nature’s subtle layers, so that the true essence of what lies within nature can be restored to its rightful position within the Earth as a cosmic being. Since Earth is undergoing a huge cosmic renewal of which we are part, we too will sense a realignment when we do the exercises with intent. The Gaia exercises that Marko Pogacnik invented are a form of tool for doing this sacred work. That is why I combine it with sound and dowsing, so people can reconnect to the Earth and start to dance with its patterns.