Recently I took friends and clients to a new site in South Galway I discovered. Some old friends of mine had mentioned a bullaun stone lying in their local butcher’s field by the river. A bullaun stone is a stone with a carved hollow in its centre. Some believe these stones were used as early baptismal fonts while others believe that they were primarily used for grinding corn in! Yet others perceive them as healing stones. They are perceived as holy and often are found in ancient graveyards or close to them in Ireland. I decided to go by myself the first time as I normally do, to see if it is a place worth bringing people to. 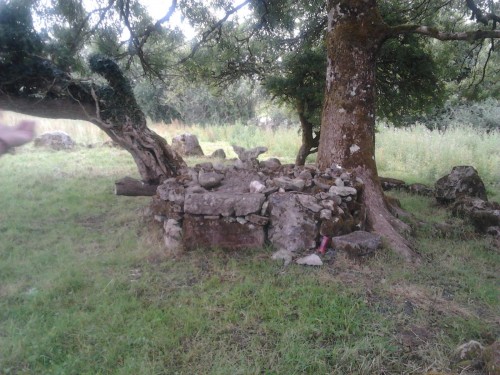 When I got to the site I parked my car by a farm gate and walked through the stile. I could not believe that ahead of my was an oval shaped circle of stones with the most majestic leaning trees growing among the stones. Walking closer I saw that one side of the oval was straight and that there was an opening on the far curve of the D-shape.  As I continued into the centre I saw between two beautiful old trees that stones had been piled up into an approximate altar, and that there were one or even two bullaun stones on top of the flattened pile. Another stone was erect and resembled an angel. I wondered what the site was about. I guessed it must have been an open air church in the so-called penal times, when the local people were not allowed to practise their Catholic faith. I was correct in this, but I sensed too that the site might be older than 2oo years or so. There were woods to one side going down to the peaceful flowing river, and a large elongated hill on the other side.
I returned with some sensitive women and one of them immediately felt great heat rising from the bulluan stone; the centre was emitting the energy. However later this settled down and was not so active- it was almost like it appreciated the attention it was receiving. This same women descended into the wood. She was so excited about a stone she found with many apparent cup marks that she proceeded to scrape clean of moss. (short video to be inserted asap here to demonstrate). She felt that there had been ceremonies in the woods. I was not so sure but I knew this woman was very sensitive and many extraordinary things have revealed themselves to her in the past. 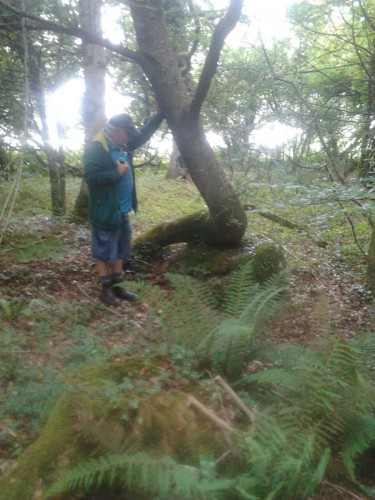 Examining and communing with spirit of tree

A few days later I took a spiritual healer there on one of my local tours. He had the ability to talk to tree spirits and fairies among other gifts. He felt that there had been a community living in these woods and that the elders were seated in one area, the children were playing in another and the working men and women were both active elsewhere.

The following day, in a break between the incessant rain we are encountering this summer, I visited the butcher who owns the land. He proceeded to tell me that no one ventures into the woods in question because 85 children have been buried there in a killeen, meaning they died too young to be baptised or there was no priest around to baptise them so they were buried outside of a formal graveyard. The formal graveyard and ancient parish church is not too far away and dates from the ninth century at least- formal records of a Viking invasion record the site. The friendly butcher also told me that the farmer is unable to plough the land due to the multiple graves that extend beyond the woods, and that it is known that many people lived in the area around the makeshift altar.

He related how people were positioned as lookouts on the hillside to warn the congregation of when the British were approaching. However it appears the people were unable to scatter fast enough. Four times a local person stepped in to shield the priest who was illegally saying Mass, donning his priestly garments so that the priest could escape, and then of course the local person was executed in his mistaken identity as the priest.

Memories of such human sacrafices do not disappear. However I had taken people to the site who had no idea of the local history, and each time they had found joy and peace. In the meantime the locals leave this place alone, as indeed they appear to leave many places well alone in the locality. This makes me ponder on the power of place. We tend to project our own knowledge of a place onto its current state, and perhaps do not sense a deeper reality. Could it be that this place has a layered history and that before all this tragic recent history it was a harmonious settlement and the circle was older? Even if the circle is only 300 years old, it sits in harmony with the landscape and is a perfect place to meditate.

Sometimes when you visit places where death and suffering has occurred, the spirits of the people linger on in a less than mournful way, for what is death but a door to another world we inhabit?