Beautiful voice duet in crypt at Rosslyn available to download for donation.

Recently I came across an old CD with several recordings donated from Jacquelyn Atkins from Byron Bay in Australia. Jacquelyn had come on a tour with me in Roslin and had explained how she taught toning as a spiritual practice and service. I was fascinated as I have always responded deeply to sound. I had not trained in sonic acupuncture or sound healing at that time, but I was very interested in this aspect of healing.

So after the tour Jacquelyn came round to my flat and demonstrated how she relaxed and let the sound flow through her and go where it was needed, paying little heed to how it sounded. The following morning 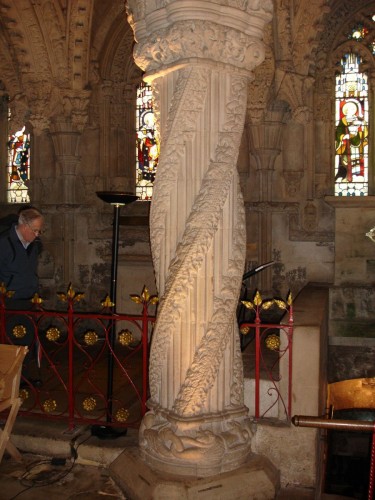 we ventured round Rosslyn Chapel before it opened. The staff knew me well and kindly let us in ahead of the crowds, so we could create sound uninterrupted in the chapel and crypt. I recall how the manager held back tears in his eyes when we came upstairs, saying it was quite moving and even beautiful. I had never seem his so moved- he normally is in a “normal” zone, but that morning he was transported elsewhere. Angels were with us.

After a while I started to join in quietly with the tones that Jacquelyn was producing. As I gained confidence the duet grew in powerful tones. Listening back now, I feel that the two voices sound infinitely better than one. The tones really do reflect the quality of the place. I am immediately inside the crypt when I hear this, and to me these sounds are infinitely better than the manufacture plaintiff that has been created from deciphering the notes in the cubes in the Lady Chapel above. Toning can create or augment a sacred space and take it to an even higher level. It strips the veils of illusion away in its simple cleansing sounds.

I am willing to let anyone listen to this extract for a minimum of 2 euro donation via paypal. Please make your offering to info@spirit-of-burren.com

I will donate 50% to charity and publish what was earned from this at the end of the year.