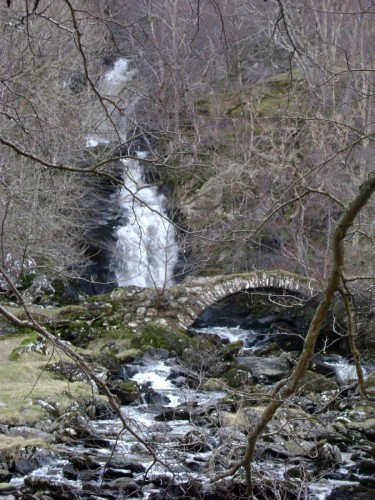 When I lived in Scotland I was aware how Glen Lyon in the heartlands of Scotland was an area that was ringed by ancient homesteads known affectionately in old books as “Fingallian ring forts”, or “Irish homesteads”.The term “Fingallian” was ascribed to the ring forts in the locality because Finn was the mythical here here, and not Arthur as in so many other parts of the UK. Locals claimed that this was a small, special region in which the Irish language was spoken on the mainland of Scotland earlier than any here. The language was also spoken in the Hebrideans and it would be several centuries before Columba arrived from Donegal with his Dal Riada sept to colonise the southwest of Scotland. He brought his native tongue in the wake of that invasion of sorts, and this dialect formed the basis of modern Gallic in Scotland. The Gaelic of Glen Lyon and the Hebrides by contrast was a localised affair. Over in Ireland, the legends of Finn are remembered in the far north west in County Donegal. Fionn is a semi-mythical warrior like Arthur, but he is more aligned with the faery energies. This reflects the nature of his place of origin.

So I was delighted to have the chance to go north to Donegal a few weeks ago, after a damp dull spell of weather. The skies blessed me with a perfect day for exploring the area I was drawn to…and speical numbers kept cropping up that I recognized were reflections of the energies of my short quest. I stayed in Ballybofey that straddles the banks of the River Finn. Known as one of the best salmon and trout rivers in Europe it is sadly below the EU stock levels that allow fishing currently. 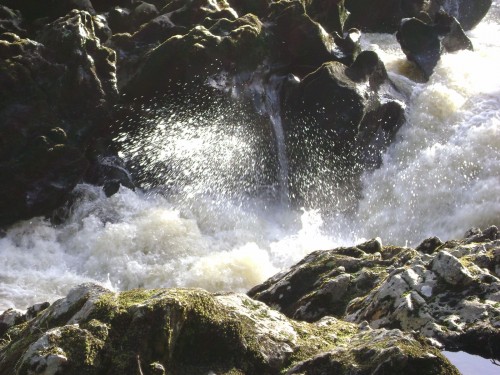 SALMON POOL
I always take note when people tell me out of nowhere about a place that is dear to their heart. When a waitress in my hotel on the first evening told me of the salmon leap my heart leapt despite my body feeling weary after a long drive. I knew that I had to visit it the following day. It was only a short drive away from Ballybofey, and as I drew near I met an international group of fishermen all clearly disappointed with their non-catch. I left them to pack up their equipment, and moved along a path dilineated in the woods. As the water started to sound its might I drew nearer the pool, and an eagle soared from the water and circled into the trees above me. I knew it had been feasting in these treacherous waters. I chuckled at how the mighty bird had outwitted the stocky men downstream.

RIVER ENERGIES
I sense the river here is deeply feminine. Deep bands of quartz lie exposed in the hard rock either side of the river. As it winds its way downstream toward the border and County Derry, it is like a bride going to meet her husband.  I would call it the Lost Magic of Finn here. Rivers influence the tone of a land. 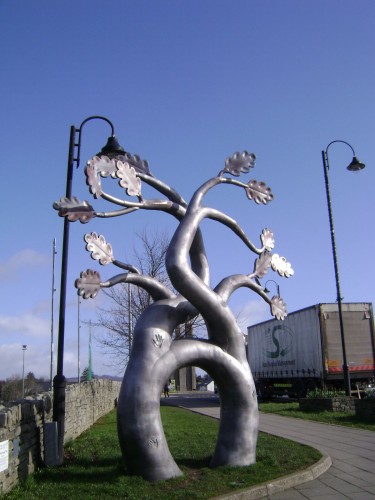 At Ballybofey the bridge over the river Finn has an appropriate statue of a tree on it. The male and female energies are clearly in balance here. They are depicted as two trees, confirming the strong elemental presence that affects the people and land here.

The Ireland/UK border runs midway down the sweet river Finn for some while before it meets the(masculine?) Foyle downstream at Strabane. The approach to Derry City feels flat and less energized than the beautiful part of Donegal the Finn has passed through. On the roundabout the Derry City side of the river Foyle show two hands, not quite joining. Union is no more, for now.

There is an area of land between a triple flow of rivers after Strabane- the central river bears the border. 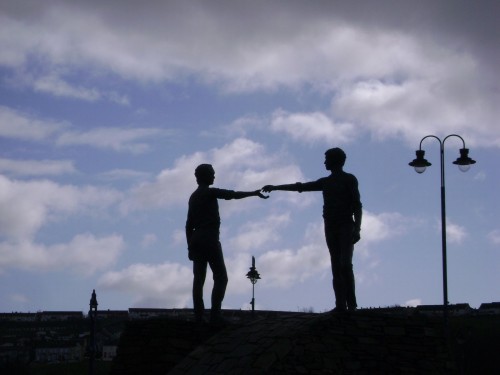 hands reaching out, not touching

This to me would be a good place to prepare with the elementals before undertaking ongoing peace work in society. Perhaps Marko Pogacnik and I will go there next month.

There is hope- if you look at this statue from another angle the hands are almost joined!