It’s not to do with the size and it’s all to do with the quality of a site. In this case that truth is clear to behold when you visit Ireland’s smallest stone circle: Kealkil Stone Circle in beautiful West Cork.  In The Divine Blueprint Freddy Silva mentions this same circle as forming a triangle of alignments with the better-known sites of Avebury and Callanish (Outer Hebrides). For me it all began six years ago when a stranger rang me while I was waiting directly above a room where a profound sound healing was taking place. Whilst on a tour a client was receiving sound healing at my colleague’s home in the Pentland Hills near Edinburgh.  That very minute I was experiencing a blissful moment of intense joy; my own chakras were reverberating as if in resonance with the client below; my stomach was simultaneously gurgling a full scale of notes. Meanwhile my client’s wife was experiencing energy shifts in the correspondent chakras. It was an unforgettable energy that swept through the room, as my mobile rang out. It was a complete stranger who told me spirit had led him to ring me and invite me to the aforementioned sites that Freddy Silva had written of, with the intention of performing sound healing at each site. My stomach was still resounding the scale so I knew this was no mere coincidence, It was as though during the sound healing the client, his wife and I had formed a human triangle representing the sites this stranger now told me were linked energetically! 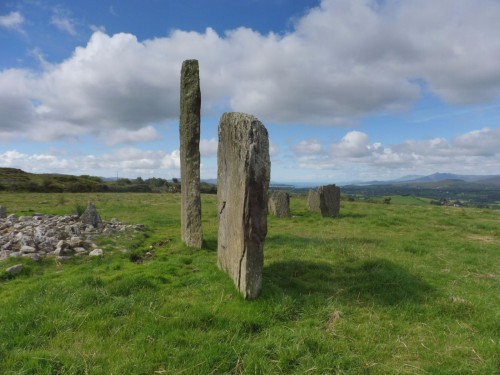 I had other work on at the time so had to refuse the exciting assignment offered by the stranger.My mother hails from a coastal farm close to Kealkil and Glengarrif so I was determined to see Ireland’s smallest stone circle one day.
So at last, perhaps six years on, I had arrived on a rare warm and sunny day at the stone circle. The much publicized mud was abating to some extent, and I barely had time to acknowledge that my long awaited trip to Kealkil had materialised when I caught a glimpse of the tall stones standing to one side. I felt a familiarity as though I had come home to an energy that was whole and righteous.

I set about disentangling the more tangible elements from the intanglibe ones that lured me into sitting against its stones and breathing in the essence of life. Apparently many of the stone circles in Cork and Kerry form a similar pattern. Here though was a circle that was in much better state of preservation that many I have seen, despite it being Ireland’s smallest stone circle. There was pair of standing stones that stood as silent witnesses to the five-fold circle of stones. These I dowsed as both masculin in quality, with an energetic flow between them. There was also a collapsed cairn behind the two stones. This one held 18 post holes- which is a double nine or treble six. I immediately sensed a star pattern there. There was a ring of small upright stones that dowsed feminine in quality. Meanwhile the centre was exuding tremendous peace. It was an inward-looking goddess cairn, with a ring-pass-knot around it so it was fully protected. Focussing now on the actual stone circle I dowsed the large stone was masculine in quality, as was a smaller stone opposite. the remaining three were feminine, and the centre was once more a stillpoint. The circle was alive and in balance. A huge energy field surrounded it, that reached the other monuments nearby. The two masculine tall stones that stood as sentinels beyond were like lightning rods bringing down fire codes for feeding the circle. Each area had a peaceful centre and whilst the cairn had no energy field due to its inward directional flow, the stone circle performed an opposite role of expansion and blessing. I closed my eyes and sensed how the site was actively linked to the wider landscape. The love that is stored in the cairn relates to the ability of the circle to connect with other spots in the landscape, based in the past on ritual work to link it with elsewhere perhaps. I saw a hillside in my mind’s eye, and bright emerald triangular shaped portals that opened to the interior of the land. 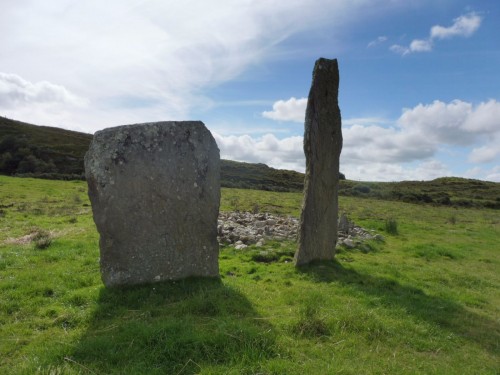 I returned to the site twice to accommodate other visitors who would arrive, and each time I left with the feeling that this was a site closely linked to the eternal. I also have received more insights into why my mother never really left this place in her mind. She lived most of her adult life in London, but always talked of the local villages and townlands as if they were more real than the streets around her.