I am compiling a list of legends of dragons, fairy people and other diverse creatures that stem from the natural landscape of County Clare. This is for a free talk I will be giving on Friday 16th October at 8pm at the wonderful Kilshanny House in County Clare. I think this venue is a perfect match for the contents of the talk, which will be harkening to the not-so-distant past when everyone believed in the magic of fairies, and the magic of the land. I am hoping the storytelling will continue into the evening with others bringing their own legends with them to enrich us all.

Going through my books Spirit of the Burren and the Burren Trails and Essence of the Burren it is interesting how many stories I could extract that relate directly to a locale or landscape. Peter Aranos is kindly playing his violin at this event. We have worked well together in the past for my short nature films set to poetry, another which I aim to present one in local libraries this November on Galway’s Changing Landscape. That’s the subject for another blog though!

Kilshanny House lies close to Cairn Connaughtu on the banks of the river Daly. There are several stories and legends associated with this cairn, and so as not to spoil if for those attending, I will refrain from relating them here. This picture taken of it is by Kevin Lynch who lives nearby. Kevin is a gifted photographer who together with his wife run a successful natural soap business in County Clare. When I first read about the legends connected with this cairn I decided to visit it. I tracked down the owner who led me into his field to view it. From the perimeter of the field I could feel the cairn pulsating. It was one of those moments I will never forget. The cairn was emmitting huge power. It overwhelmed me for a few minutes. 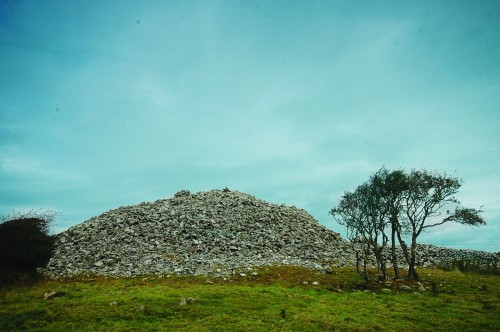 Last weekend I visited another cairn on top of Turlough Hill. That too emmitted great energy, but only from its east side where it channels the energy across the ftat-topped hill. Turlough Hill is the most easterly mountain in the Burren and lies between the lowland of south Galway and the Burren Hills of Clare. It is believed that people used to stay on the hill for certain times of the year only, during which ceremonies were conducted. The cairn lies at the west end of the hill, and another mutli-faceted causewayed enclosure lies at the east end. In between there were many hut circles whose remains are still visible.

Nearer at home in south County Galway, I recently led a workshop on dowsing in Mountshannon in east Clare. We were going to Holy Island in Lough Derg to apply our dowsing skills but were prevented by relentless rain. It is interesting to visit old ecclesiastical sites near me that are associated with the same saints who stayed on Holy Island. It indicates the routes they travelled across the land. The name saint was ascribed by local people due to the respect these people commanded in the folk memory, rather than a formal sanctification by the Church of Rome.