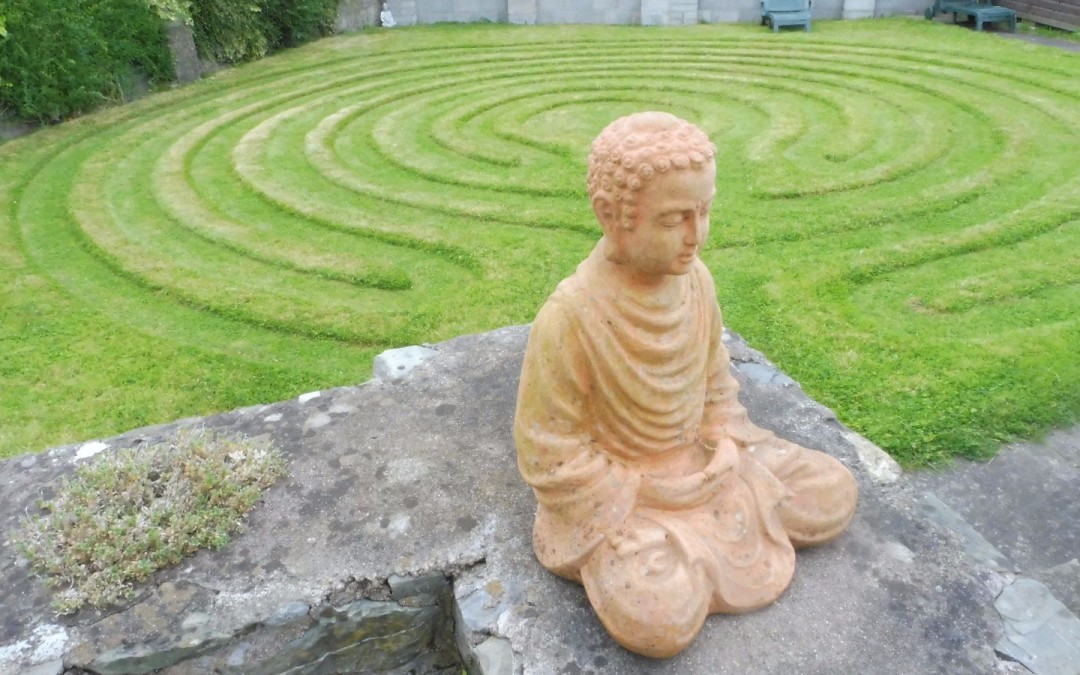 One of the artefacts I come across on my wanderings over Ireland is the labyrinth, a very special mechanism for centering and clearing yourself, especially when journeying! Here is an account of my visit to labyrinths in Cork. Enjoy!
In late July I drove to Cork with the intention of looking at some labyrinths. I stayed at the home of Tony Christie, known in Ireland as “the labyrinth man“. Imagine having the opportunity of popping out barefoot each morning to walk your own labyrinth! As an exchange for filming Tony talk about his labyrinth business some months ago, he took some films of me. With no rehearsals I stepped out with my pendulum, gong and divining rods and he filmed what came to me in the labyrinth. How many of you find that when you walk your thoughts become clearer? When you walk a labyrinth this process is accentuated. My first foray into the labyrinth drew me toward its energetic patterning rather than any healing process. I tend to like to read patterns in the land wherever I go, so I went with this in this short film where I find the “node” of the labyrinth, which is its mathematical centre!

I then picked up my healing gong and walked the line. The line in this case is the heart chakra, as I am finding that labyrinths not only change qualities along the different pathways, but also are wired up along lines radiating out laterally from a given point, and each chakra is attached to a different lateral line. I hope to do more work on plotting these radials when I next visit a labyrinth, as this pattern seems universal.

After the home labyrinth we ventured out to one created by my old friend Martin Dier, who now lives in the Burren like me, but used to work at St Finbar’s Cathedral where he managed to create a labyrinth whilst working for the bursar! This labyrinth had mixed energies I felt, and it may be due to the fact that the site has long been used by alcoholics and druggies, to this day I am told by the cathedral staff. It also may be due to the complex burial stacking that had to take place on such a compact site. In the next clip you see me explaining this briefly and continuing to explore where the ancient round tower may have stood in its vicinity. I felt it was good to acknowledge this long buried monument, since the labyrinth in many ways was becoming a substitute for what it stood for. Whereas in the past the round towers used to emit strong protective and healing energies, the simpler structures encountered in ground labyrinths exude similar qualities today.

There were three distinct areas of telluric activity as possible locations for the labyrinth. If fragmented all three locations may bear some of its masonry. Interestingly the trees that stood between the labyrinth and where the round tower is reputed to have stood were devoid of leys, and physically truncated. They still looked healthy but they were not alive in the way the smaller trees were on the far side.  In scenes where there has been destruction and abuse and many ancestral spirits stored up, it could be that the elementals depart from such an area in favour of the nearest place that is more whole in its vibration. It would be interesting to return to this location and do some Gaia Touch exercises here to harmonise the site and ipso facto the labyrinth. However the ongoing presence of some unsavoury elements of human society may prove this somewhat difficult to carry out in peace! It certainly gave me lots to think about!