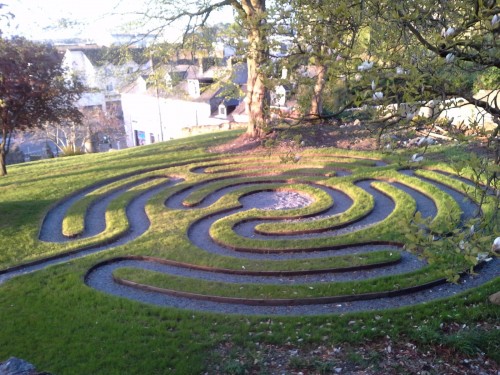 Walking a labyrinth is very beneficial for our mental and spiritual health. I have known of labyrinths as a tool for reflection for at least 30 years. When I lived in Edinburgh the University had a beautiful one installed in George Square. This was convenient for students before facing exams!  It was a haven for contemplation when I was taking my Theology certificate in 1995. Originally it was hoped to construct it from white quartz pebbles but that costly plan was thwarted. It is lined with granite stones and enclosed by yews. Situated in the northwest corner of the square, its higher purpose would align with the entrance to the temple via the ray of the divine mother, before penetrating the “holy of holies” which would be in the centre. This knowledge is part of the Reshel system I studied with William Buehler. To me the positioning is perfect and shows that the labyrinth there is fit for purpose. The labyrinth is based on the design of the one lain on the floor of Chartres Cathedral. Since there are often chairs placed over that ancient labyrinth, the one in Edinburgh was closer and more accessible. The pattern of the Edinburgh University labyrinth is very empowering when you walk it, inducing a feeling of raised consciousness in the walker.

A recent visit from Tony Christie in Cork was full of happy coincidences. He had created a labyrinth on communal land belonging to a community at Clough Jordan in Tipperary. I happened to be visiting a friend close to the village in a few days’ time, so we visited it and managed to walk it in peace and comfort, since it was a rare sunny day! 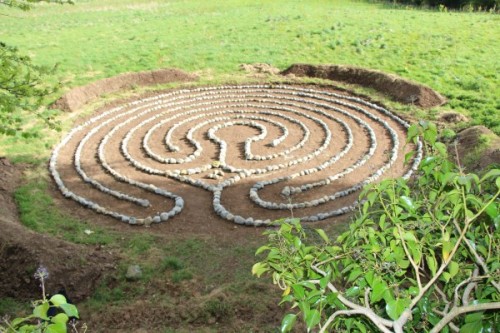 I walked the labyrinth now fully grassed, and as I crossed over certain points on each path I felt a stirring in a particular chakra, and then noticed that the points shared the same axis, passing through the centre and on through to the other side of the circle. I also picked up a second chakra in a similar way, noting a shared axis. From my direct experience I was able to map out a heart line and a sacral line, and was convinced that I was picking up energies on these radial lines that equated with individual chakras. We could call this phenomena “walking through chakra lines”.

The following day an old friend visited for a sound healing. He had created the beautiful labyrinth that lay behind the Protestant Cathedral in Cork City. Martin Dier is a sensitive and I shared my recent experience with him. He told me how there were several ways to read the energies of a labyrinth rather than just according the the layers around the centre. The way I had described was one variation that was not so common but known of. I was satisfied with his explanation. It made me realise that each person will respond in their own way to walking the labyrinth.

For Tony Christie, the emphasis seems to be on linking to the whole, so circular movements are important. He sees the circular paths as representing various chakras. For me in the most recent visit I made to a labyrinth, it was the spatial direction of the chakras that pulled me, perhaps because I dowse ley lines….

What works for you when walking labyrinths? I would love to see how varied a response can be when walking the labyrinths. I know one can also see visions for instance… 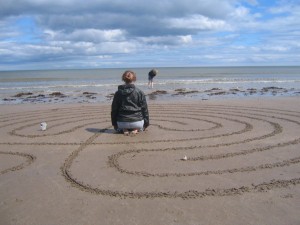 Watch out for my follow-up blog, which will combine the subject of labyrinths and their settings in the natural and built landscape!