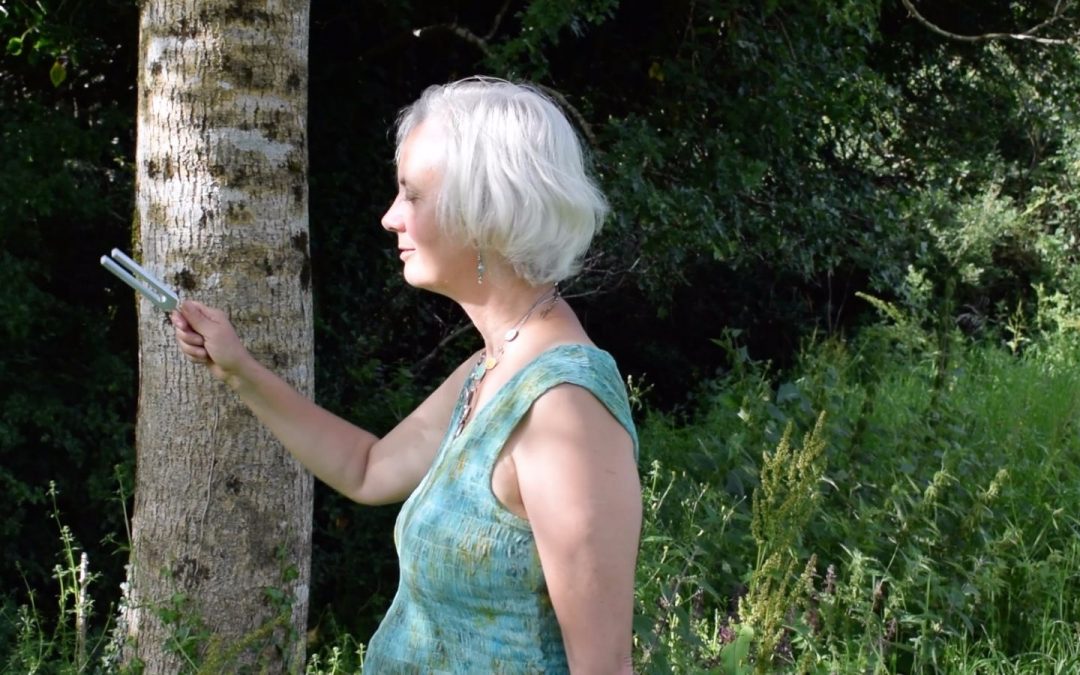 Last weekend I had a great opportunity to try healing trees with sound. I have always felt that sound healing can work on trees as well as on people. My recent additional training in biofield tuning reminded me of this possibility. When I attended the Tara festival in County Galway as a workshop presenter I chose to give a trinity of workshops leading up a tree healing, although I had no idea what trees grew on site.

How to Expand the Aura using sound and intent

The first workshop was all about Gaia Touch because I wanted people to experience the deep peace and interconnectivity that exists between various forms of reality. We did this in a sand arena where the ground was scattered with broken pieces of blue and green glass in addition to the sand itself.

The second workshop started with a few Gaia Touch exercises and proceeded to sound healing using my gong. A volunteer stood in the middle. As I sounded the gong I heard a most eerie noise emanate from the gong that informed me that there was a disturbance in the biofield. It started at a low frequency and rapidly rose to a high pitch, indicating a nervous tension somewhere. This was the first time I was able to diagnose a problem in the biofield using my gong rather than the tuning forks. The group dowsed the person before and after sound. Each time the aura had grown considerably. We also dowsed after applying Gaia Touch exercises and using our voices to tone. Each time the aura expanded around the person but the largest expansion resulted from the gong. This is because the gong holds an enormous range of undertones and overtones within them.

In the final workshop of the day the weather grew nasty with a lot of wind and rain. However that did not deter the intrepid group from working. Serendipitously one member of the group had brought a potted Ash tree into the festival, hoping to find a new home for it. She felt it needed protection and a nurturing environment. She eagerly offered to bring it into our circle for healing. The other trees on site were mainly ash and hawthorn but all were fairly inaccessible for a group of people. As we stood around we sent a healing tear of grace from the Gaia Touch series to the tree. We also perceived the Essence of the Tree.

Dowsing proved the move the aura out about six to twelve inches. We then played the gong to it and its aura moved about eighteen inches. By now the aura was not circular but rather kinky and lopsided. So I dowsed my tuning forks for the note to sing in unison to the tree. It was F sharp. I later found out this note to be highly significant as follows.

The F sharp major chord consists of the dominant note F sharp, C sharp and A sharp (the latter which happens to be the one I use to clear spaces with). These notes contain the most harmonic number frequencies within the Pythagorean mode based on A set to 432 concert pitch.

In addition F sharp is related to the Bindi chakra, a mysterious and remarkable energy centre at the rear of our scalps. In Tantra Yoga great importance is attached to the healing and rejuvenating effects of this Chakra. According to yoga experts, when awakened this normally dormant energy centre begins to flow or to “drip”. The Bindu Chakra produces truly astonishing effects. It is a “health centre” that brings about improved physical, psychic and spiritual health. Apart from aiding our spiritual journey it also helps to quieten our emotions, bringing harmony and a sense of wellbeing.

Could it be the same for this wee Ash tree? I suspect so. It is said in the ancient scriptures that just one concentrated drop is sufficient to make new shoots grow on a piece of dry wood, and bring the deceased back to life!

When we had sung the note and dowsed again the aura was perfectly even, completing a large circle round the tree. This brought relief to the owner of the Ash tree. She was also very happy because she had indeed found a new home for her ash tree with another member of the group! Coincidentally many people attending the Tara festival thought that the over-riding energy of the tree was that of the Ash, even though it was not the official Ash month. This had more to do with the intent of the festival which was to create new society values based on love and co-operation and equality.

JOIN ME ON MY NEXT WORKSHOP TO EXPERIENCE MORE OF THIS TYPE OF WORK!