Why call it Climate Breakdown?

I have some thoughts on climate breakdown I want to share with you! I assume you realise that climate “breakdown” is more commonly termed climate “change”. It is far more than change though, and when I read this term online and it relit a lightbulb in my head. When I was a student of Human Ecology in the 1970s, then the term “Climate change” was applicable. The business school in the adjacent building used to mock up us for our idealism and even used to call our predictions “craziness”.

When I watch Greta Thunberg speak, it feels like I am returning to my youth. In a flash I can remember my own youth, at times clouded by indignation and sadness. How could a widespread business model (chiefly adopted in the western hemisphere at that time) pay only lip service to the finite supply of natural resources? How could it have complete disregard for air and water quality in the name of progress? Within the growth model widely accepted, cost benefit analysis was a poor tool to measure the damage wrought as human and nature’s networks destroyed their inter-dependence.

What my sixth senses told me was common sense was a complete anathema to many, whose main reason for studying was to get a good job and consume all they desired!

My own family too at the time could not see the sense in pursuing lofty ideals of living in harmony with nature. For them it was a waste of time more or less. 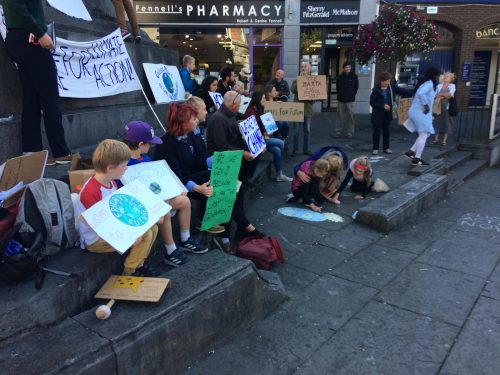 So when I joined a small “climate strike” at 9 a.m. yesterday in my local town, I was surprised at how the public mood had clearly shifted. I had gone there to support the teenagers. I stood with a small placard saying LISTEN TO THE SCIENCE alongside a picture of the Earth, and the large bulk of motorists driving round the square put up their thumbs after realising the issue we had gathered for. Some of those walking by were compelled to join in, and as the numbers swelled I chose to leave.

I drove my car to the coast to walk close to my ancestral home. I admit I wholly depend on my car living in the west of Ireland outside of a town. The present reality is that if people were not living here then the rift between countryside and city would be so stark the country would be culturally dead. Many of Ireland’s rural dwellers contribute enormously the unique culture that represents Ireland. My soul needed some time by the Atlantic to clear the mind.

As I walked the coastal byways, I saw this small field full of flowers 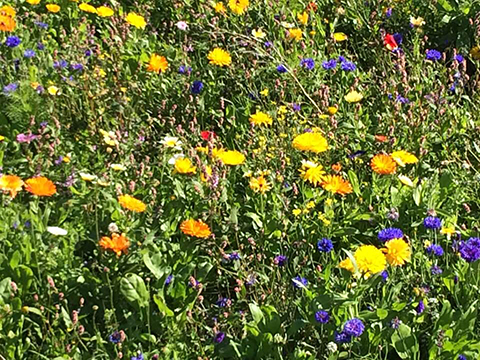 which took my breath away. Later I posted it on Facebook and a respondee wrote ” Yes indeed Jackie- this is how I feel too. Planting is what we really need, if we can turn protests into plantests we’d be living abundantly, our creator insects would be pollinating and balance would return in nature.”

The power of nature

I walked on a bit further and saw wild pale lilac coloured lilies, bright orange mombretia and scarlet haws dangling over a stream that gushed along from under an old stone bridge. Something took my breath away and I felt free. Free like when I was a teenager visiting these parts from London. A joy rose up and it was sheer bliss to walk in the warm Autumn air. 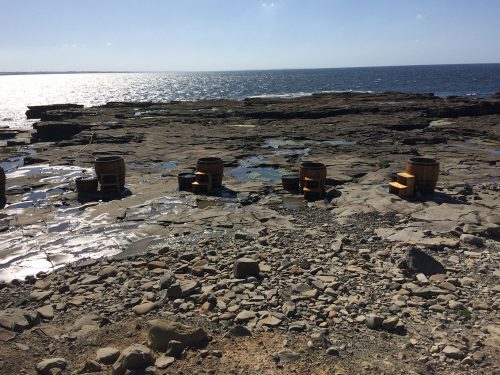 the limestone shoreline, all filled with steaming hot water offering you seaweed baths in the open air.

The van parked there displayed the generator’s origin, which claimed its green credentials. When I spoke with the ingenious proprietor he told me he drives up and down the entire west coast of Ireland, returning every six weeks to the spot he is in today. It seems the van is not electric – and maybe there are not enough electrical charging points en route. So while the seaweed bath looks very natural, there is a slight irony in the situation. I think many natural products we want to use leave a deep footprint on our planet – but it need not be like this if our infrastructure went green!

I loved the idea of partaking in the barrels another time, but more to the point my heart yearned for the politicians to take stock and allow the viable alternatives to fossil fuels to flourish, by funding research, supplying grants and incentives, and in short finding the political will to do the right thing.

Because everything is still possible- solutions are already out there but are not yet backed by those who make the laws. Those individuals are not representing the people, to be sure.

It was Culture Night, a national event in Ireland where locals create thousands of free events. I stopped by in Ennistymon in West Clare and artist Sarah Foust of the Foust Gallery warmly invited me to her event of poetry, song and painting. It turned out the theme was the inspiration of nature to intrinsically bind people together in a synergic appreciation of nature. She talked of an bent tree (illustrated below) still being strong at the roots. This was a fitting description of Gaia now, who will spew us all out if she has to! 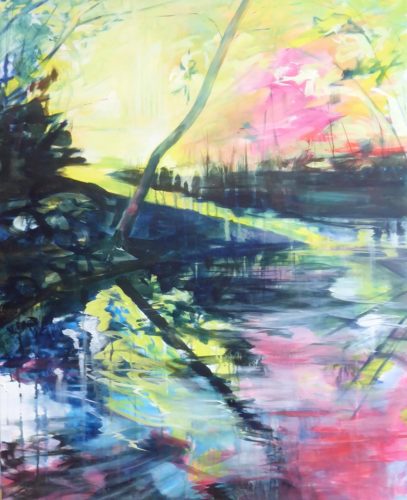 It is time to reconnect with Nature – she is patiently waiting for your loving attention on all levels. It all starts with intention, the highest form of prayer.